According to the 2014 census, the province’s population is 473,000 (female: 233,000). Vientiane Plain which covers Vientiane Province and Vientiane Municipality is the largest plain in the country. Situated in the lower reaches of the Nam Ngum River Basin, it is one of the nation’s largest food production hubs. The province has a total rice production land area of 66,768 hectares which yields approximately 269,960 tons of rice a year. Other popular crops and produce in Vientiane Province include corn, Job’s-tears, cassava, bananas, limes, cucumbers, sweet tamarin, tobacco, and watermelons. 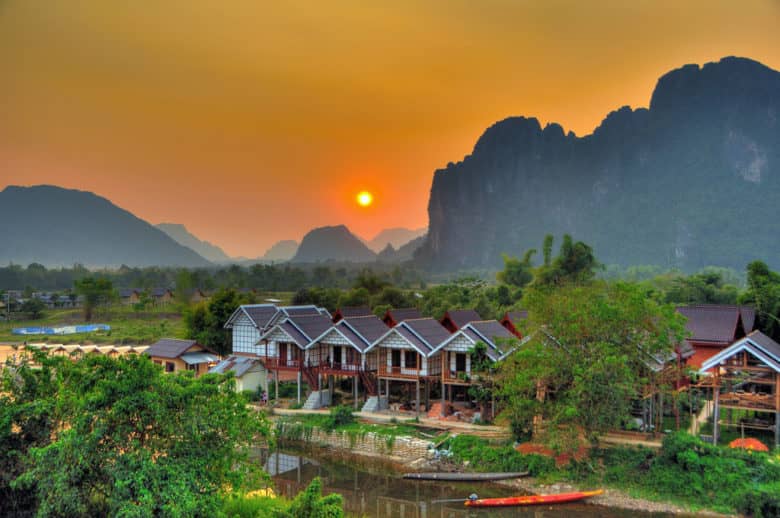 In its 8th Five-Year Development Plan (2016-2020), the Lao government encourages more sustainable agricultural productions that link to processing. Vientiane is among the chosen provinces for agro-processing industry. Production centers have been founded for crop seeds and animal breeders. The goals are to scientifically promote good seeds that yield short-lived crops as well as to boost economic plants and animals. A number of fishery demonstration centers and fresh water fish breed production centers have been constructed to meet the market demand within the province and surrounding areas. The government also plans to construct handicraft centers for bamboos and rattan weaving in the province to produce commercial goods. Other government’s ambitions for Vientiane Province from 2016 to 2020 are to develop chemical plants such as chlorides, sodium salt, alkali, and kali fertilizer and to explore more electricity generation potentials.

The Lao government is committed to environmentally and socially sustainable development. Therefore, investor(s) will be required to complete either an Initial Environmental Examination (IEE), for smaller projects with minimal impacts, or an Environmental and Social Impact Assessment (ESIA), for larger projects that involve the public participation and seeks to mitigate negative impacts while maximizing benefits.

Vientiane Province is blessed with many attractive sites. The heaven-on-earth beauty of Vang Vieng, the big, open sky and vast freshwater of Nam Ngum Dam Reservoir, the magnificent sight of Phu Khau Khouay Mountain, to name a few. Tourism in Vientiane Province, especially in Vang Vieng, has skyrocketed in the past decade. Accordingly, accommodation services have been expanded and improved to meet the demands. As of 2014, there are 13 hotels, 272 guesthouses, 208 restaurants, and 26 nightclubs operating throughout Vientiane Province. The province’s natural resource abundance, good road conditions, and close proximity to the nation’s capital make it a desirable investment destination for domestic and foreign investors.

The information in this document (including but not limited to, photographs, descriptions, tables, projections and prices) are for guidance only. While every effort has been made to offer current and reasonable estimates, errors can occur. The investment promotion department of the Ministry of Planning and Investment makes no warranties or representations as to the accuracy, correctness, reliability or otherwise with respect to such information, and assumes no liability or responsibility for any errors or omissions in the content contained in this document. Within this document you may find links or references to third party material and third party web sites. The IPD accepts no liability in respect of the contents of such material or sites. The IPD should not be taken to be endorsing, publishing, permitting or authorizing such materials or sites. The IPD may revise the information and resources contained in this document from time to time and reserves the right to make such changes without any obligation to notify past, current or prospective visitors to this document.

The content relating to the potential performance of an investment is not necessarily a guide to its performance in the future. The value of investments or income from them may go down as well as up. Prices quoted is based on US dollars when the document was created.

The information contained in this document should not be construed as financial, tax, legal or any other professional advice or service. You are advised to consult a financial and/or legal professional advisor from suitably regulated sources.

Except where noted otherwise, all material in this document is the property of IPD with all rights reserved. Without the prior written consent of IPD, no permission is granted to copy, modify, post or frame any text, graphics, or logos.