Salavan is a southern province of Laos. Covering an area of 16,389 km2 (6,328 sq. mil.), it borders Savannakhet Province to the north, Vietnam to the east, Xekong Province to the southeast, Champasak Province to the south and Thailand to the west. It has a total population of approximately 397,000 people and is divided into 8 districts and 588 villages. Bearing the same name as the province, Salavan City – the provincial capital – sits atop Bolaven Plateau, an ancient volcano that erupted millions of years ago. The city is the administrative, economic, and cultural center of the province. It is reachable by routes 15, 20 and 23. The province is home to 10 distinctive ethnic groups, many of which are small in population, but have their own language. Their houses, lifestyles, beliefs, cultures and rituals are unique and very fascinating. Once this region is easily accessible by road, it will become a popular cultural tourism destination.

XeXap National Protected Area starts just to the east of Ta Oy and expands eastward beyond the Lao-Vietnamese border. It is an important bird sanctuary for the country and home to a variety of evergreens. On the northwest of the province, there is Xe Bang Nouan National Protected Forest. PhouXieng Thong Forest Reserve is the only national protected area on the Mekong River. It covers the entire western border of Salavan and a part of Champasak territory. 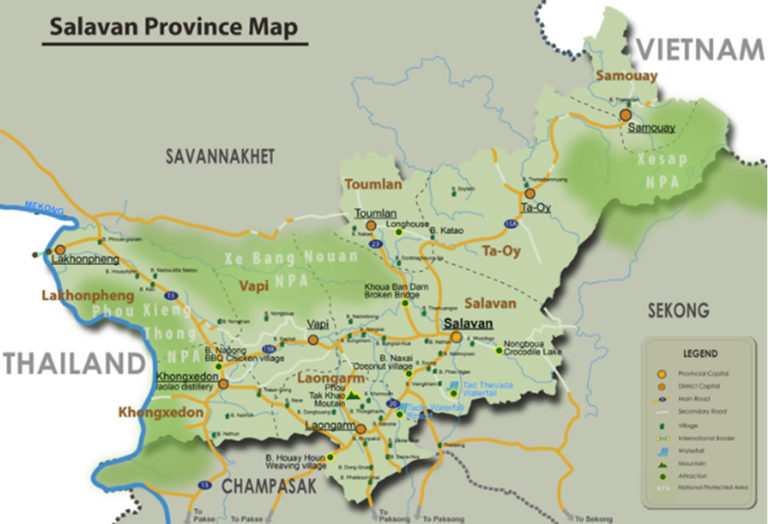 Currently, there are 327 investment projects operating in the province, 106 of which are privately owned. Local and central investment promotion authorities invite domestic and foreign investors to explore potential environmentally and socially sustainable investment potentials in this beautiful province.

The Lao government is committed to environmentally and socially sustainable development. Therefore, investor(s) will be required to complete either an Initial Environmental Examination (IEE), for smaller projects with minimal impacts, or an Environmental and Social Impact Assessment (ESIA), for larger projects that involve the public and seeks to mitigate negative impacts while maximizing benefits.

The information in this document (including but not limited to, photographs, descriptions, tables, projections and prices) are for guidance only. While every effort has been made to offer current and reasonable estimates, errors can occur. The investment promotion department of the Ministry of Planning and Investment makes no warranties or representations as to the accuracy, correctness, reliability or otherwise with respect to such information, and assumes no liability or responsibility for any errors or omissions in the content contained in this document. Within this document you may find links or references to third party material and third party web sites. The IPD accepts no liability in respect of the contents of such material or sites. The IPD should not be taken to be endorsing, publishing, permitting or authorizing such materials or sites. The IPD may revise the information and resources contained in this document from time to time and reserves the right to make such changes without any obligation to notify past, current or prospective visitors to this document.

The content relating to the potential performance of an investment is not necessarily a guide to its performance in the future. The value of investments or income from them may go down as well as up. Prices quoted were based on US dollars when the document was created.

The information contained in this document should not be construed as financial, tax, legal or any other professional advice or service. You are advised to consult a financial and/or legal professional advisor from suitably regulated sources.
Except where noted otherwise, all material in this document is the property of IPD with all rights reserved. Without the prior written consent of IPD, no permission is granted to copy, modify, post or frame any text, graphics, or logos.