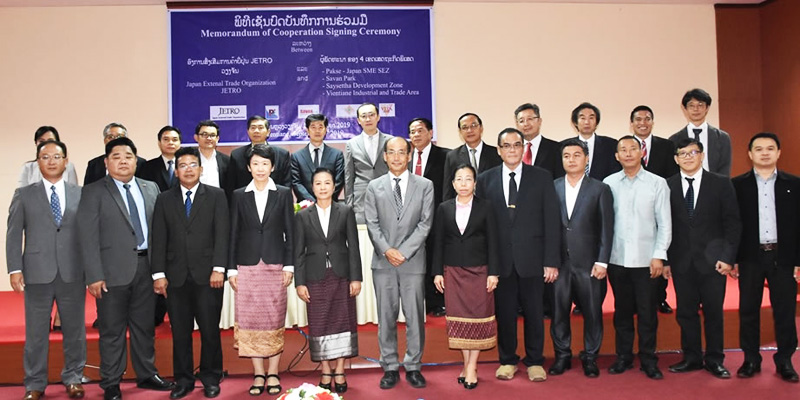 A Memorandum of Cooperation was signed in Vientiane on Tuesday by the Chief Representative of JETRO Vientiane, Mr Katsuichi Iwakami, and the zone developers.
The signing ceremony was attended by the Deputy Minister of Planning and Investment, Ms Khamchanh Vongseneboun, representatives from the Malaysian and Japanese Embassies to Laos the Special Economic Zone Promotion and Management Office, and officials from various government bodies.
The four targeted zones are the Pakxe-Japan SME SEZ, Savan Park, Saysettha Development Zone, and the Vientiane Industrial and Trade Area (VITA Park).

JETRO Vientiane, which was established in 2014, is undertaking various activities although its main responsibility is promoting investment by Japanese companies in Laos, Mr Iwakami said.
Since the establishment of JETRO Vientiane, investments by Japanese companies in Laos had doubled and many firms are now considering the possibility of opening a branch in Laos, he added.
Some companies approached the JETRO Vientiane Office for consultations and to seek information on Laos’ investment laws and other considerations, especially those relating to establishing a company, tax payments, marketing studies, and business partners, Mr Iwakami said.
Laos currently has 12 SEZs which have attracted investment from almost 600 Lao and foreign companies, of which 40 are Japanese, Ms Khamchanh said. Japan is ranked third among foreign investors in the SEZs, she added.

Among members of the Japanese Chamber of Commerce and Industry who have invested in the Mekong sub-region, only 105 companies have a presence in Laos. The comparative figure for Vietnam is 1,900 companies, 400 for Myanmar, and 270 for Cambodia, according to JETRO.
Officials said this new cooperation will encourage more Japanese companies to invest in Laos by publicizing the development of the Lao economy and its investment laws on JETRO’s website.
To boost business partnerships between Laos and Japan, JETRO has published the “Laos 100 excellent business” book and last year arranged business matching with 19 companies, of which six firms have started business operations.