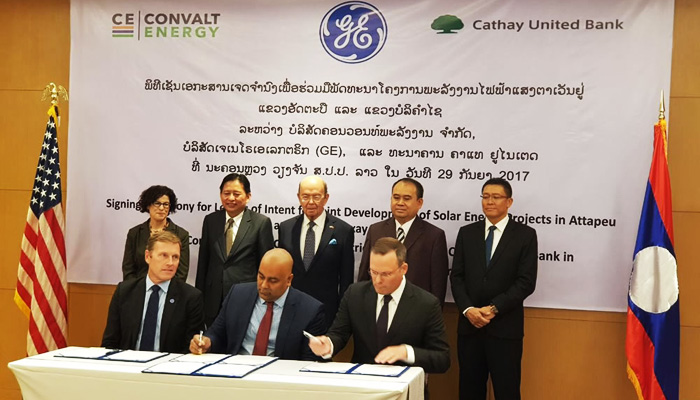 U.S. Secretary of Commerce Wilbur Ross witnessed the signing of the LOIs at a ceremony in Vientiane, along with Rena Bitter, U.S. Ambassador to the Lao PDR, and senior Lao government officials including Dr. Kikeo Chanthaboury, Vice Minister of Planning and Investment; Mr. Chansone Sanebouttalath, Vice Minister of Energy and Mines; and Mr. Somchith Inthamith, Vice Minister of Industry and Commerce.

Convalt signed MOUs for solar power development on August 31 with the Ministry of Planning and Investment and the provincial governments of Borlikhamxay and Attapeu Provinces, where Convalt is currently developing solar plants of 50MW and 250MW, respectively. At an estimated cost of $400 million, this project would constitute the largest investment into Laos by an American company. Both solar plants are expected to be operational by December 2019.

GE is expected to supply electrical equipment including inverters, switchgear and electrical equipment for the transmission and substations to be built as part of the projects. Cathay United Bank, a leading bank in the Asia-Pacific region, is expected to assist with project financing including providing debt financing for the project. U.S.-based DigiCollect will be performing feasibility studies including Environmental, Social Impact Analysis and other technical studies related to the project.

Convalt, founded in 2011 as a portfolio company of ACO Investment Group, is primarily focused on developing, operating and maintaining energy generation, transmission & distribution assets. Please see www.convalt.com for more information about the company.

Convalt and its partners General Electric (NYSE: GE) and DigiCollect are currently working on a 300 MW AC solar power project in the Mandalay Region of Myanmar.